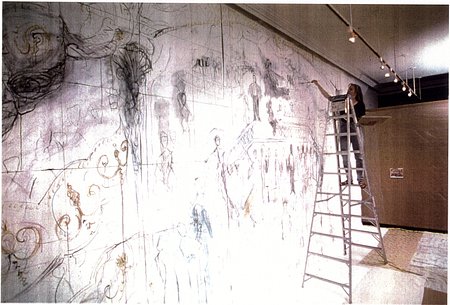 Jessica Daryl Winer is a painter whose work is fueled by her native New York City--its landscapes, architecture, inhabitants and the contrasts and visual surprise of random geometry in the midst of urban chaos.

Her work often encompasses public-oriented projects, often large scale or site-specific, often involving the performing arts; it embraces the relationship between spectator and environment and a sense of narrative, with the idea that over millennia, it is the arts that remain a civilization's lasting footprint.

Jessica's work has been shown in both solo and group gallery exhibitions and large scale public installations, including Centennial Trees of Central Park, a series of paintings exhibited at the Michael Schimmell Center for the Arts, Pace Univ., New York, NY.  Her painting of the Flatiron Building is in the permanent collection of the Museum of the City of New York. She is also represented in the permanent collection of the New York Public Library for the Performing Arts among other public collections, and in private collections nationally and internationally.

Her public installation of suspended, kinetic constructions (set in motion by air currents), Dancing on Air...in Times Square was exhibited at the Times Square Visitors Center from 2002-04.  She was commissioned by American Ballet Theatre to create two special edition prints.  Commissions also include posters and theatrical set design, projected drawings for musical performance; her paintings of opera and jazz subjects have been reproduced by Jazz at Lincoln Center and the Metropolitan Opera, including a Met poster.  Her work has appeared in the New Yorker, along with other publications.

Dance Floor (2002) a 6' by 8' floor canvas, traces, in paint, the dance steps of 28 dance world luminaries (from Merce Cunningham to the Radio City Rockettes)--a quest to render the invisible, visible (now held by the Capezio Foundation).  She revisited this project recently for DancePrints, with companies such as Dance Theatre of Harlem and Paul Taylor Dance Company.  Jessica teaches a variety of drawing classes and workshops for institutions like the Central Park Conservancy.

She was educated at Swarthmore College, with studies in Rome and the National Academy in New York (where she studied with Will Barnet and was awarded the Nechamkin prize in drawing).  She is a graduate of the Rudolf Steiner School.

Jessica is represented by the Harmon-Meek Gallery, Naples, Florida.

Museum of the City of New York, NY, NY